This cake is a twist on the traditional s’mores with a chocolate ice-box cake. The addition of the graham cracker layer and marshmallow cream frosting makes this dessert addictively delicious!

“S’mores Ice Box Cake” is a recipe for a cake that includes graham crackers and chocolate. The cake is topped with marshmallow ice cream, chocolate sauce, and toasted marshmallows. 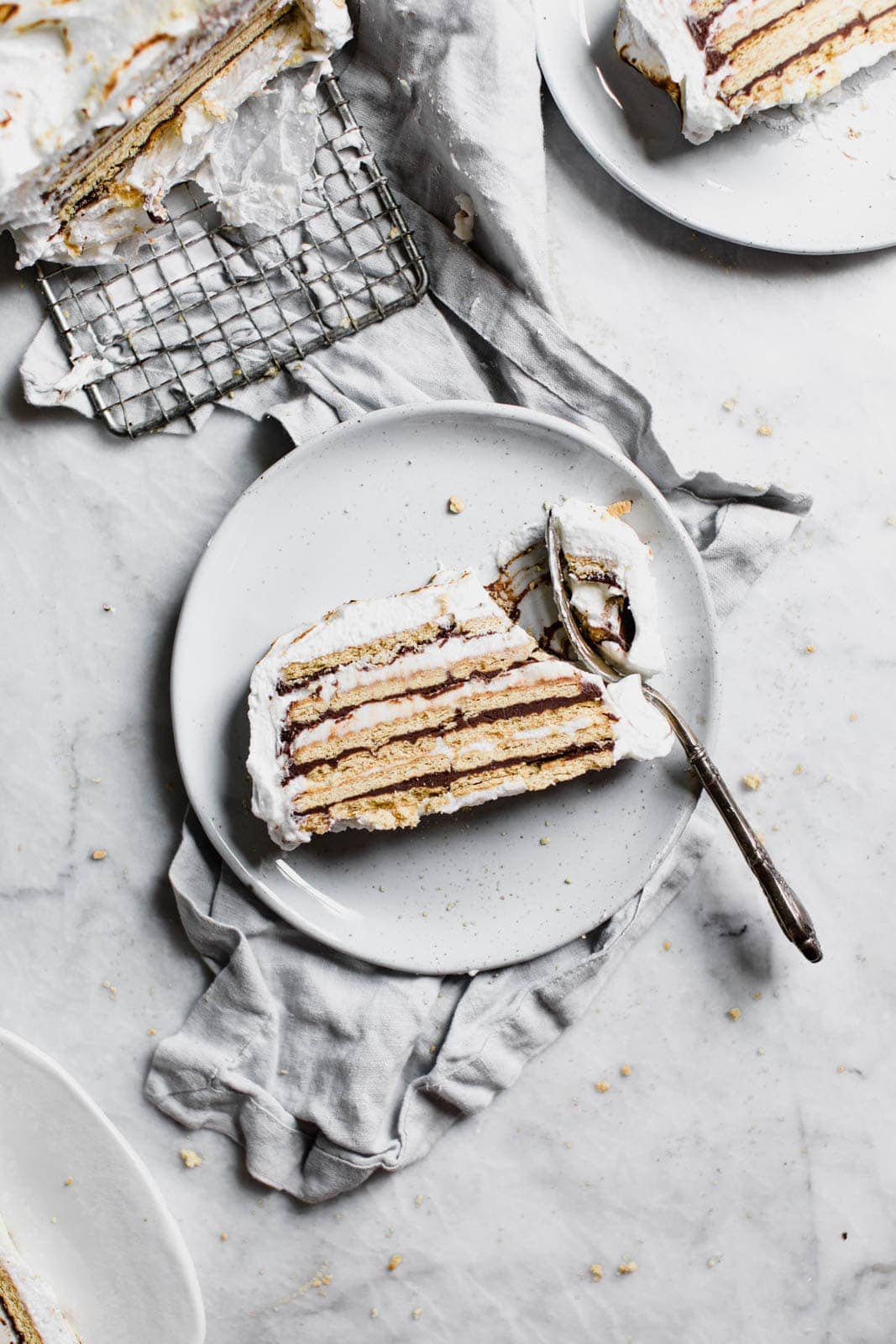 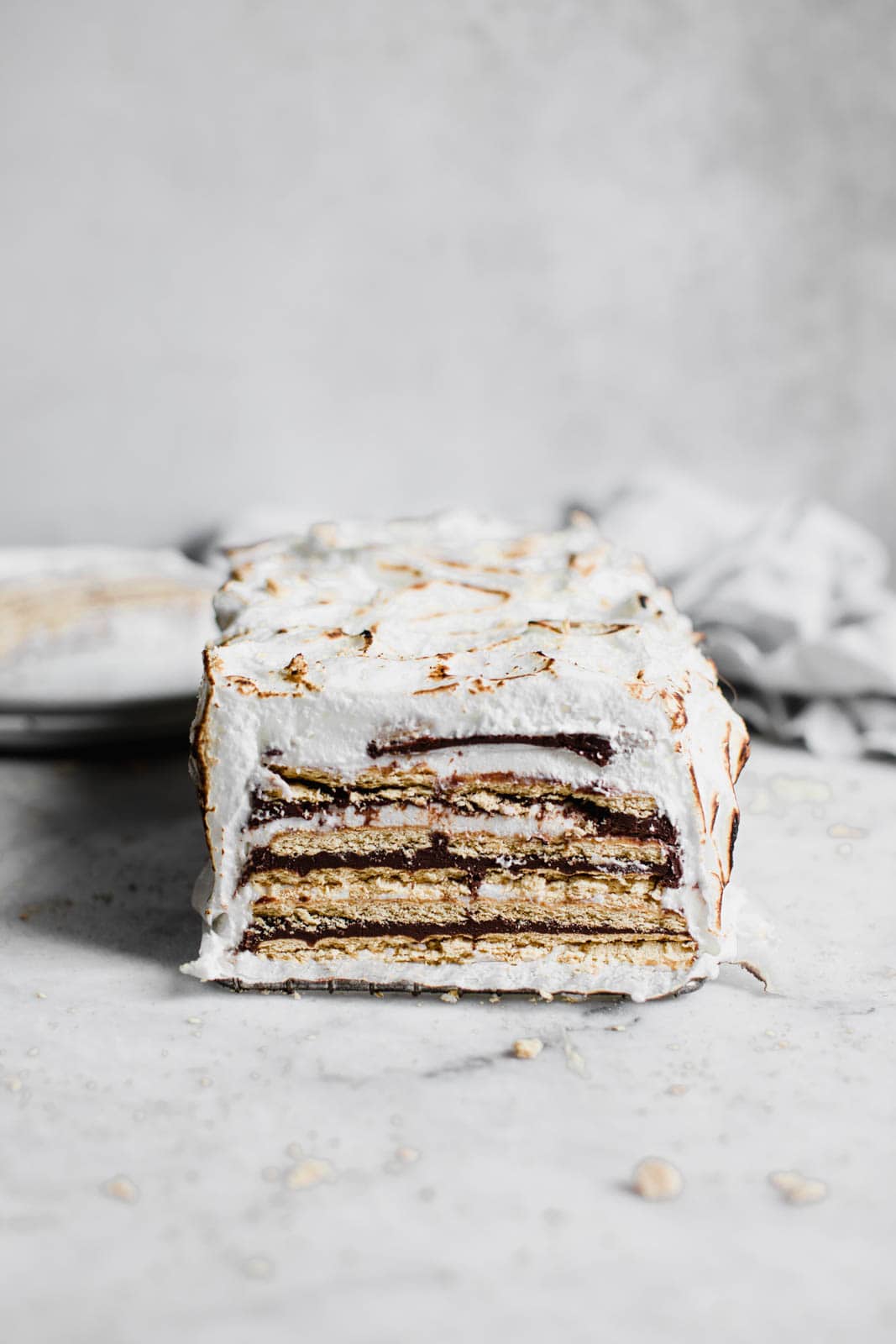 But, in a way, I agree. And coming from someone who isn’t a huge fan of whipped cream, claiming that this S’mores Ice Box Cake is the greatest thing I’ve cooked all year says a lot.

So, what’s the deal with this icebox cake? Graham cracker crumbs, chocolate ganache, and marshmallow fluff whipped cream are layered on top.

It’s completed with a handmade Swiss meringue that you burn to appear like toasted marshmallows, whelp you guessed it. 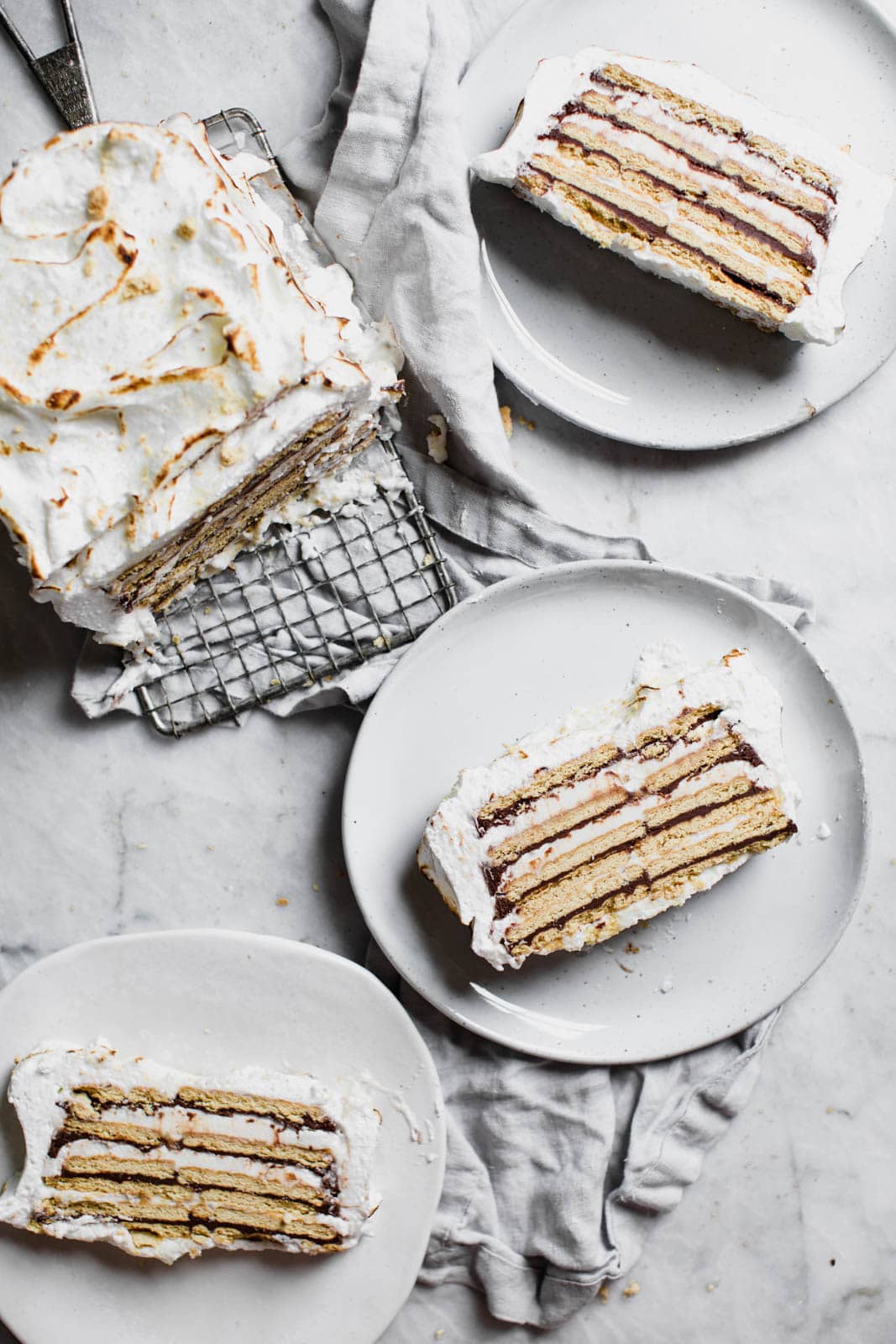 Normally, ice box cakes are prepared in the refrigerator, but I suggest chilling this one in the freezer. It maintains the graham somewhat crispy, ensuring that each layer remains intact when sliced.

However, if you choose to go the conventional method, the fridge will suffice! 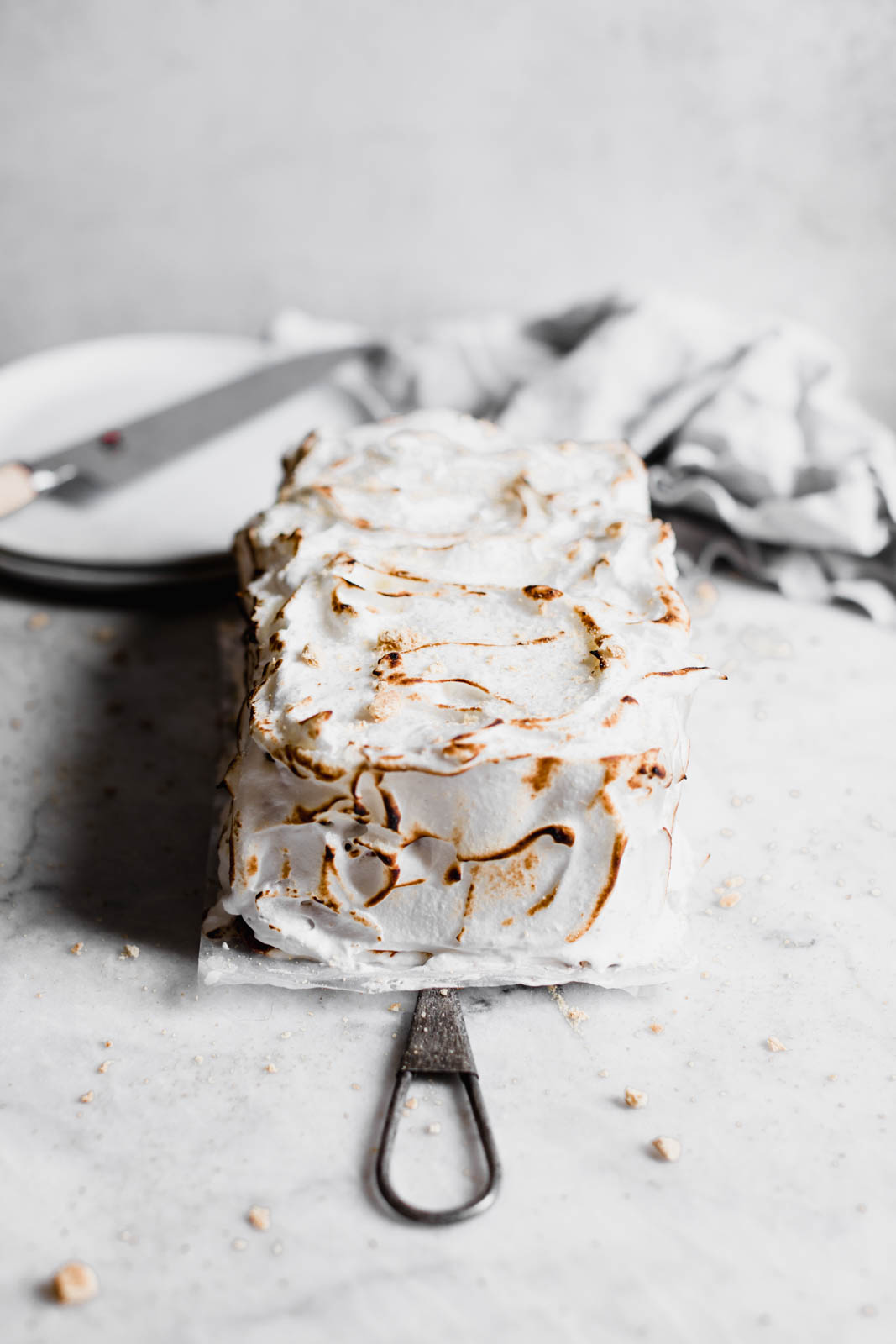 Also, I’d want to give you a little anecdote.

I purchased a blow torch expressly for the purpose of torching this cake. But I had already created the meringue when I noticed the torch didn’t have any lighter fluid, so I patiently held a lighter to this cake and burned each individual crest of meringue to make it seem properly burnt. 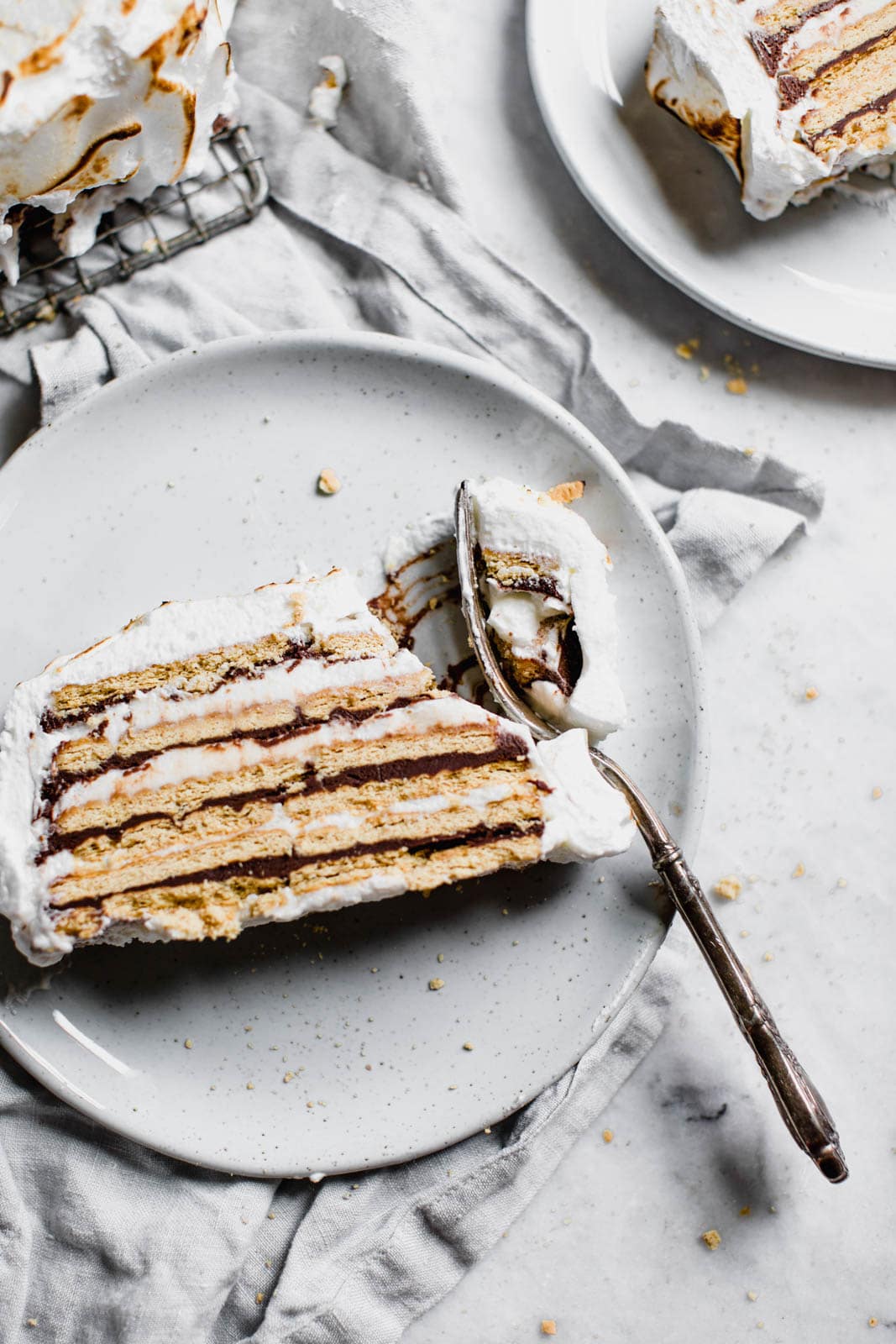 If you’re creating this s’mores ice box cake ahead of time, I recommend making the “cake” half beforehand and freezing it (I mean honestly it can last for weeks in the freezer if you store it properly).

The meringue is the only item you’ll need to create the day before. Easy. Peasy. 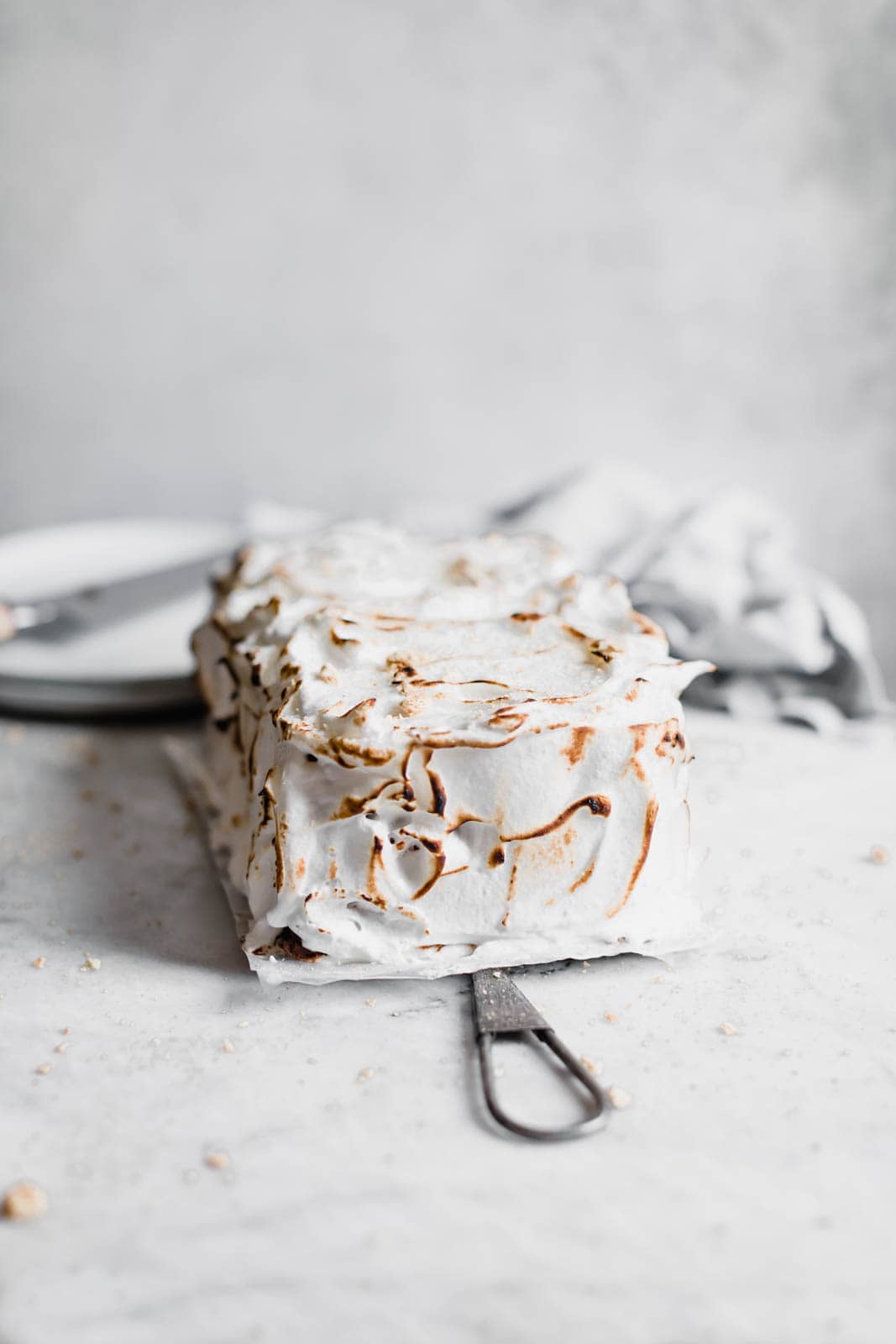 To make the meringue, combine all of the ingredients in a mixing bowl.

1 cup heavy cream, heated in a small saucepan over low heat until scorching (not boiling!). Remove the pan from the heat and add the chocolate chips.

Allow 5 minutes for the ingredients to settle before stirring it together with a whisk. The chocolate should be completely melted at this time. Fill a piping bag with the mixture and chill until ready to use.

The remaining 2 cups of heavy cream should be whisked until soft peaks form in a standing mixer equipped with a whisk attachment. Add the marshmallow fluff and continue to beat until stiff peaks form. Remove from the equation.

Wrap plastic wrap over the inside of a standard-sized loaf pan on both sides. Working in layers, spoon and spread the whipped cream, pipe and distribute the ganache, then layer the graham crackers, beginning with the whipped cream mixture. It’s entirely up to you how much whipped cream you spoon on each layer– if you want more, go for it! Do it! More chocolate!

Finish with a layer of whipped cream, then chill while you prepare the meringue.

Fill a standing mixer with egg whites and a whisk attachment. Whip the egg whites until they form soft peaks.

Meanwhile, in a small saucepan, boil the sugar and water over medium heat until the temperature reaches 240°F. Use the ice water test if you don’t have a cooking thermometer. Place a little quantity of boiling sugar in icy water. It’s done when the sugar has formed a soft, flexible ball.

With the egg whites still in the mixer, gradually increase the speed to medium and trickle in the sugar. Continue to mix until firm peaks form in the meringue.

Remove the ice box cake from the freezer and spread meringue on top. If you have a cooking torch, use it to finish and golden-i-fy the meringue.

The “oreo ice box cake” is a delicious dessert that everyone loves. It’s made with Oreos and chocolate, then topped with whipped cream and a cherry. The whole thing is served in an ice box for the perfect summertime treat.