Red velvet has always been a favourite cake to bake, and it’s often sold in jars. Here are some simple steps on how to make them yourself! You can find the recipe below.

The “desserts in a jar business” is a new trend that has been taking the internet by storm. These dessert jars are perfect for any occasion, and they can be customized to suit your needs. 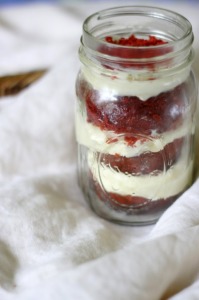 These red velvet cupcakes in a jar, despite their unappealing appearance, are delicious. The cake itself has a wonderfully delicious, rich, chocolaty taste, so it’s surprising that they use so little cocoa powder. Given that I altered the recipe a little (don’t kill me, Martha), it turned out much better than I expected. You may even take them on picnics. That’s very cool.

Preheat the oven to 350 degrees Fahrenheit. Dust cupcake rounds with chocolate powder and tap out excess. Remove from the equation. In a medium mixing bowl, combine flour, salt, and cocoa; put aside.

In the bowl of an electric mixer equipped with the whisk, blend the sugar and oil on medium speed until well incorporated. One at a time, add the eggs, mixing thoroughly after each addition. Combine the food coloring and vanilla extract in a mixing bowl. In three batches, add the flour mixture, alternating with the buttermilk and starting and finishing with flour. Mix thoroughly after each addition. Scrape down the bowl’s sides as required.

In a small dish, combine baking soda and vinegar. Mix the baking soda mixture into the batter for 10 seconds on medium speed. Mix in the hot water until everything is well blended. Pour the batter into the pans that have been prepared. Bake for 18 to 23 minutes, or until a cake tester inserted in the middle comes out clean. Allow to cool fully on wire racks in the pans. Take one cupcake and crush it into small crumbs with your fingers to use as a garnish later. Remove from the equation.

Prepare the icing while the cakes are baking. Mix the softened cream cheese, butter, and vanilla extract together in a large mixing bowl on medium speed. Add the confectioner’s sugar in small batches until the frosting is smooth and lump-free. Allow to chill in the refrigerator until ready to frost the cakes.

To can the cupcakes, use 12 or 16 ounce mason jars. Cut each cupcake in half width-wise to begin. To keep the cupcakes from sliding about, put a spoonful of icing in the bottom of the jar to serve as adhesive. Place the first half of the cupcake on the jar’s bottom. Place a rounded dollop of frosting on top of your cake half using a 3 ounce scoop. Continue with a second rounded dollop of frosting on top of the second layer of cake. You may add a third cupcake layer, followed by a third scoop of icing, depending on the size of your jar. Sprinkle a little amount of cupcake crumbs from the cupcake you put aside earlier on top of each container. Take it to go with a jar lid, or leave it open and enjoy it right away! It may be kept in an airtight container for up to three days.

The “chocolate jar cake” is a dessert that is made by combining chocolate, cocoa powder, and red food coloring. The dessert is then put in a jar and refrigerated.

How long does cake in a jar last?

A: The shelf life of cake in a jar is estimated at 3-4 days.

Can you bake a cake in a glass jar?

A: Red velvet cake is definitely not unhealthy, but it does have a few ingredients that are. For example, cocoa powder has over 100 calories per serving and white sugar can contribute to weight gain because of the high amounts of empty carbohydrates in the recipe.