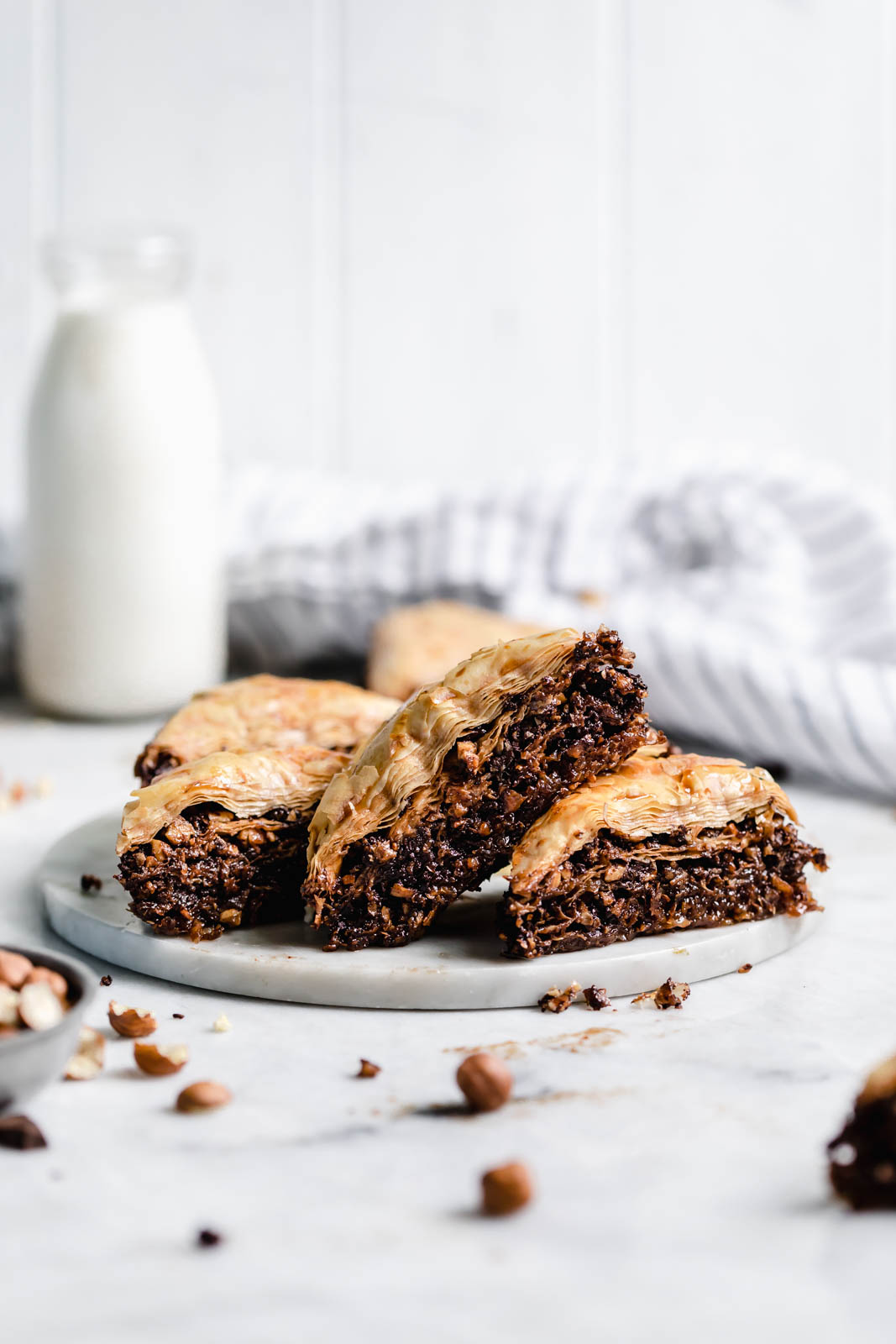 This is my favorite dessert to make with walnuts and chocolate. It’s a vegan recipe that also doesn’t require chopping nuts, which I could never do without breaking something else in the kitchen!

The “nutella baklava recipe” is a dessert that can be made with hazelnuts and chocolate. The ingredients are simple, easy to find, and the process is quick.

Everyone have a wonderful September! I can’t believe it’s already autumn. It’s my absolute favorite season, and I’m giddy with anticipation for sweater weather, autumn beer, and all of the delicious fall baked goods. So here’s what I’ve come up with. It’ll be known as Middle Eastern Month. Basically, I’ll be posting practically all Middle Eastern-inspired dishes on the site for the whole month of September!

This all began when I was brainstorming ideas for entertaining things to do on the blog. Things that are unique and experimental. I considered doing a how-to baking method series (which I believe I’ll do in the winter), blogging more about photography techniques (which has already begun, and you can anticipate more regular posting there! ), and concentrating on a particular cuisine.

So, in terms of concentrating on a single cuisine, I decided to start with Middle Eastern cuisine, which is my personal favorite. It’ll be flavorful and wonderful, with influences ranging from Turkish to Armenian to Israeli to North African.

Some of the dishes will be more traditional (Persian Love Cake and Ma’amoul), while others will be flavor-driven (Tahini Brownies and Pistachio Nougat). In addition, I’ve included a handful of my all-time favorite dips and spreads (hello Muhammara, you glorious thing). 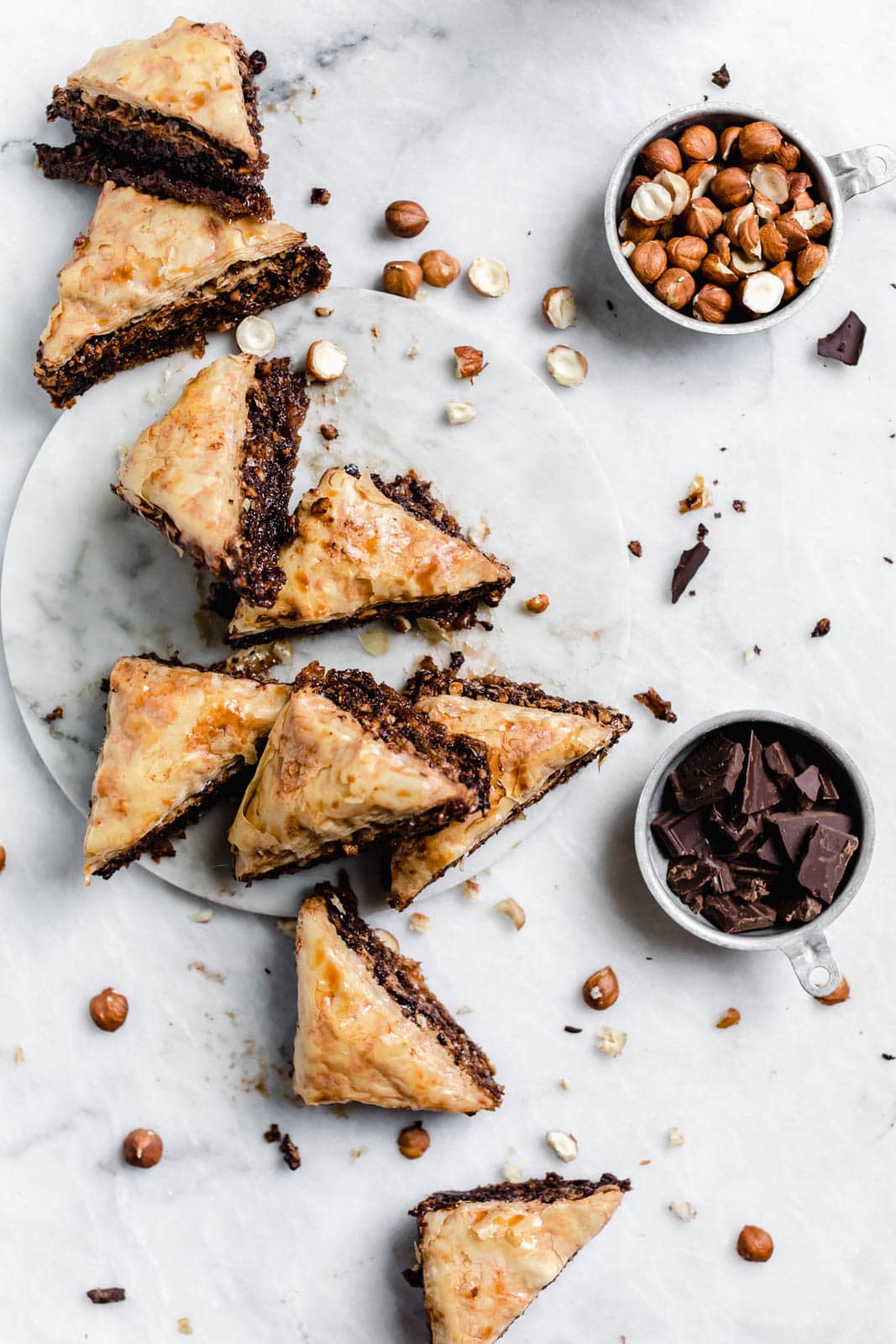 We’ll start with one of my favorite twists on a classic, this Hazelnut Chocolate Baklava from Sofra’s cookbook Soframiz, which I used to work for. I was in charge of chopping up the baklava into such beautiful triangles when I worked at Sofra years ago. Because I made so many small crumbs, the end product was usually untidy, but always delightful because I got to eat so many little crumbs. After all, it seems only fitting to begin this month with a dish from my boss, who was my first introduction to the world of Middle Eastern cuisine. 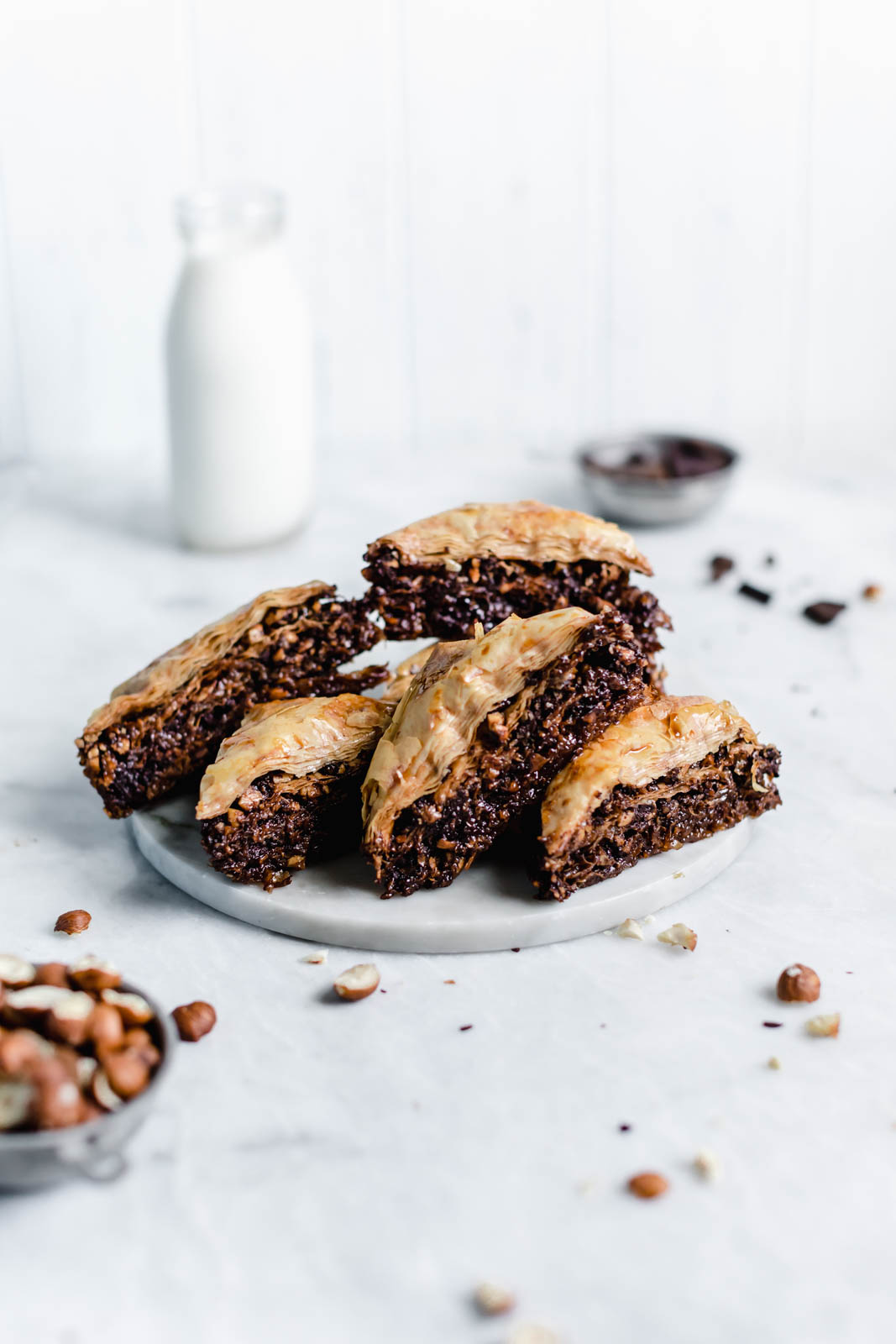 What exactly is baklava?

Baklava is unquestionably one of the greatest pastries from the Middle East. Many people in the United States believe baklava is Greek, but it really comes from the Middle East! It’s a rich, gooey dessert comprised of flaky phyllo dough layers with crushed nuts. The entire item is then cooked after being dipped in honey. Baklava should be crisp on the exterior and ooey on the inside. It’s really unlike anything else, and it’s something you must try at least once in your life! 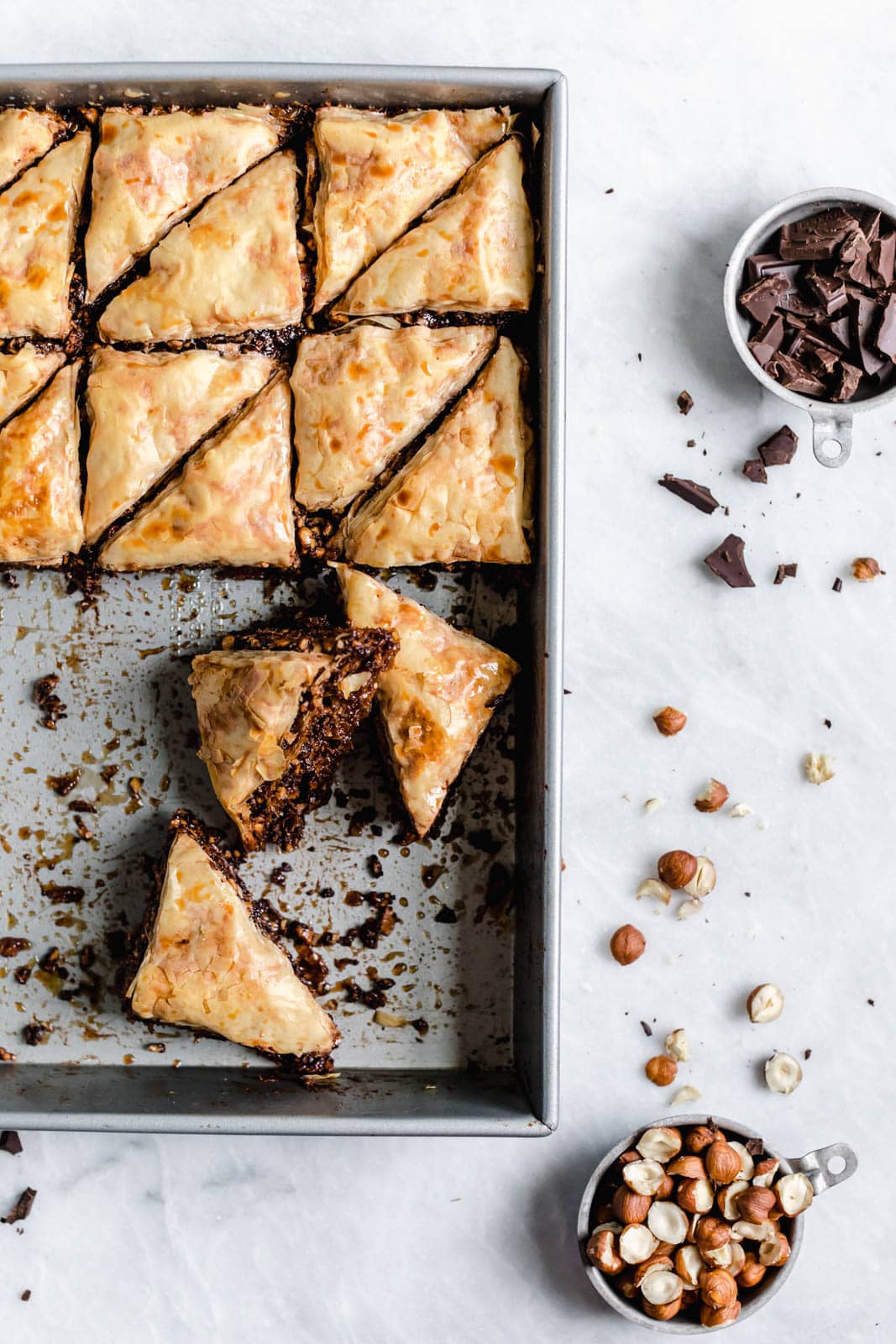 Baklava is a sweet pastry that may be made in a variety of ways.

This hazelnut chocolate baklava isn’t difficult to prepare, but it does take some time to put together. To begin, create the honey syrup that will be drizzled over the puff pastry. Water, sugar, honey, cocoa nibs, and cinnamon are used to make the syrup in this recipe. Everything is thrown into a saucepan and let to simmer for around 15 minutes before being strained and removed from the heat.

It’s time to start constructing the homemade baklava after the syrup is completed. Because preparing phyllo from scratch is a major undertaking in and of itself, this recipe employs store-bought phyllo. Brush butter between each layer of phyllo dough to produce baklava. Smooth some of the chocolate nut mixture on the dough after you’ve laid down a couple layers of greased phyllo. Rep till your baking dish is filled (don’t forget to finish with a sheet of phyllo dough!).

After the hazelnut chocolate baklava has finished baking, pour the honey syrup over the top and leave it aside to cool. If the baklava is still warm, don’t eat it! You’ll scald your mouth’s roof, and the texture will be off. 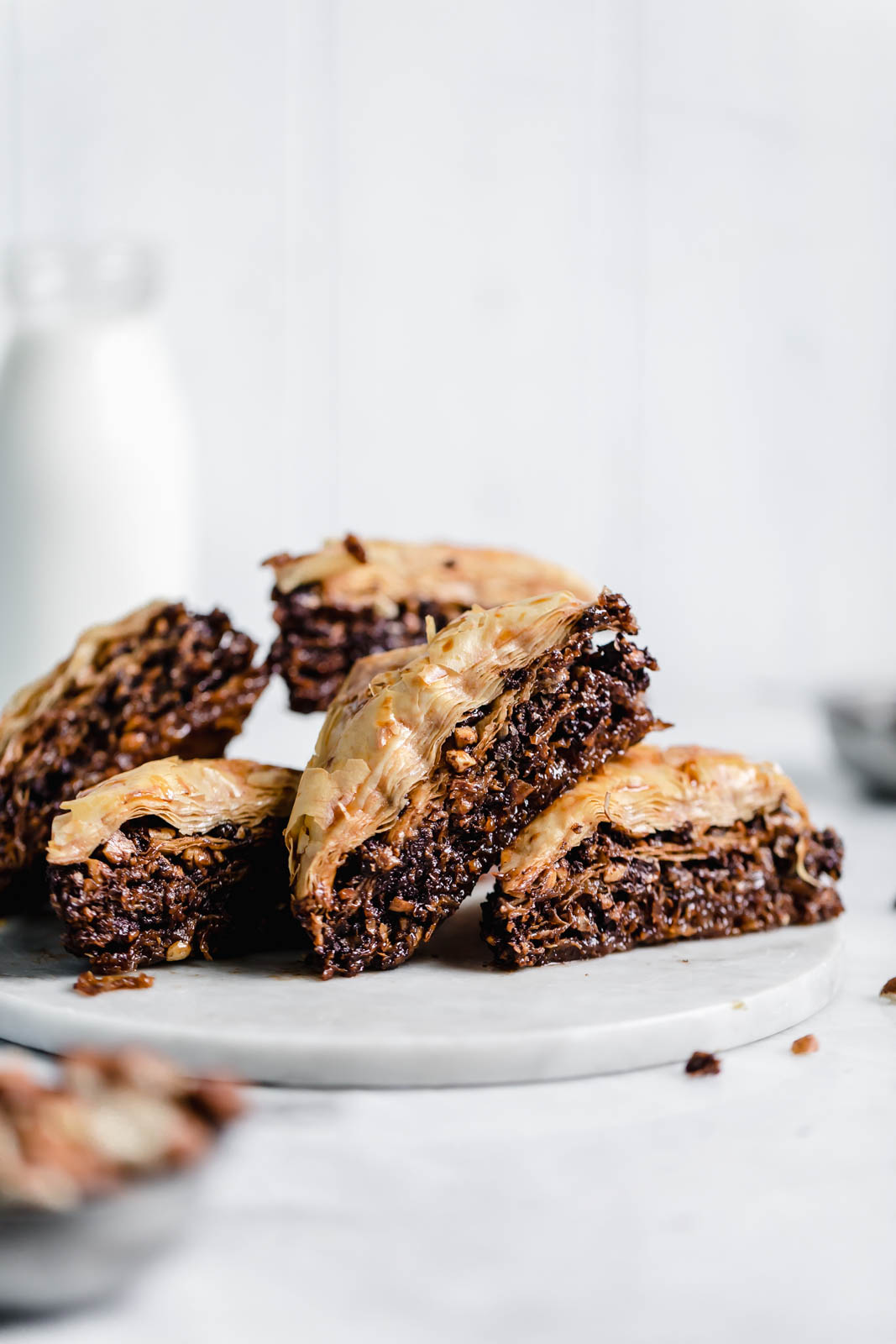 You guys have a wonderful Middle Eastern Month! I, for one, am looking forward to it!

Hazelnut Chocolate Baklava steeped in cocoa nibs and honey syrup is out of this world. Soframiz! is a recipe from the Sofra bakery cookbook.

To make the syrup, combine the following ingredients.

For the filling, combine:

More chocolate treats may be found at:

Crepe Cake with Chocolate and Hazelnuts